Higher result for Lantmännen in the fourth quarter

Lantmännen’s financial result for the fourth quarter of 2012, after financial items and adjusted for items affecting comparability, amounted to 100 MSEK (5 MSEK). The improvement over last year is mainly due to higher earnings in the Energy Sector, and lower financial costs. 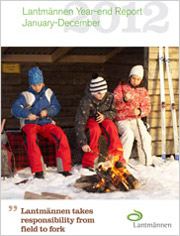 The entire year-end report is available at https://lantmannen.com/en/about-lantmannen/financial-information/year-end-reports/

The result for the full year 2012, after financial items and adjusted for items affecting comparability, amounted to 565 MSEK (841 MSEK). The decrease is mainly attributable to the Machinery and Food Sectors. The cooperative operations in the Agriculture Sector developed well during the year in terms of earnings, and the Energy Sector shows a significantly better result than last year.

“Through intensive efforts to improve our internal efficiency, and continued focus on customers, innovation, and competitive offerings, we have to some extent succeeded in countering the weak financial development in our main markets. Although the full-year result is lower than last year, many of the measures we have implemented during the year have begun to show results – and our earnings for the fourth quarter were higher than the same period in 2011,” says Per Olof Nyman, Lantmännen’s Group President and CEO.

Full-year results per sector
All figures below refer to the full year 2012, and are adjusted for items affecting comparability.

The Agriculture Sector shows an operating profit of 165 MSEK, which is in line with the previous year (183 MSEK). The cooperative Swedish operations have improved their performance considerably during the year, mainly thanks to a well-executed action program. The international agricultural operations show weaker results than last year.

The Machinery Sector has been strongly impacted by reduced demand, especially in the Swedish market, and shows a lower operating profit than last year: 300 MSEK (444 MSEK). The sector’s financial result is at a historically high level, although not as strong as in the record year of 2011. All companies within the sector are working on measures to address and counter the weaker market development.

The result for the Energy Sector is significantly better than last year: -21 MSEK (-68 MSEK). The improvement is mainly due to a sharp increase in earnings in Lantmännen Agroetanol. The ethanol business showed large losses for the first six months of 2012, but show an operating profit for the following six months. This is the result of further internal efficiency improvements, and a higher average ethanol price.

The Food Sector’s operating profit amounted to 314 MSEK (539 MSEK). The challenges that characterized last year – intense price pressure, low volume growth, and increased competition from private labels – has continued in 2012, and contribute to the lower earnings. A weak result in Unibake’s operations in the UK has also affected the food sector’s result adversely. All companies within the sector are working intently with improvements and efficiency improvements throughout the entire value chain. A new organizational structure, and a larger cost adjustment program, have been implemented in Lantmännen Cerealia during the year.

“It’s especially gratifying to see the increased proactivity on the market, and the positive earnings trend, in Lantmännen Lantbruk. The Board has therefore decided to increase refunds and price adjustment to 1.25 percent for purchases and sales to Lantmännen Lantbruk, which is equivalent to the entire operating profit for the cooperative Swedish operations,” says Bengt-Olov Gunnarson, Chairman of Lantmännen’s Board of Directors.

“Our main focus going forward is to create conditions for delivering a satisfactory financial result, regardless of the market conditions. Our goal is to create new business opportunities in combination with increased resource efficiency, thus creating a long-term, sustainable profitability. That also means that we will be well positioned when the economy turns back around. The measures and adjustments we have made in 2012 are a step in the right direction, and we will continue this work in 2013,” says Per Olof Nyman.