Higher profit for Lantmännen in the second third of 2013

So far this year (accumulated January-August) Lantmännen’s profit after net financial items stands at MSEK 640 (compared with MSEK 214 for the same period last year). The profit for the second four-month period of 2013 amounted to MSEK 569 (MSEK 187).

Profit after net financial items and excluding items affecting comparability is also higher than last year, both for the second third: MSEK 419 (MSEK 247) and so far this year: MSEK 434 (MSEK 274)

“This higher profit reflects the improvements that have been made in many of our operations. But we’re still facing challenges in several markets. To address these challenges, we’re continuing to focus heavily on cost rationalization and streamlining work in all parts of Lantmännen, so that we can increase our competitiveness and improve our service to customers and business partners,” says Per Olof Nyman, CEO and Group President at Lantmännen. 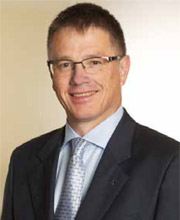 All of the figures below refer to operating profit excluding items affecting comparability.

The Agriculture Sector’s profit for the first eight months of the year amounted to MSEK 85 (MSEK 109). This lower figure was mostly due to lower profits in its jointly-owned operations in Germany, and a weaker profit in Lantmännen’s own international operations in SW Seed.

The profit for the Swedish agricultural operations amounted to MSEK 93 (MSEK 79). The profit for the first third was lower than last year, but this was compensated for in the second third by excellent work with the harvest. The harvest was earlier than in 2012, which had a positive effect on the profit for the second third. The service level was good, efficiency was high, and the new grain reception units were well received. The introduction of a new sales organization continues as planned.

The Machinery Sector has reported a profit of MSEK 129 (MSEK 146) so far this year. The demand in the machinery market, particularly in Sweden, remained low. This lower demand was partly offset by effective improvement projects throughout the sector – particularly for customer service. The action programme in Lantmännen Maskin Sweden continues as planned.

The Energy Sector has reported better results so far this year: MSEK -55 (MSEK -98). This higher figure was mostly due to a better price relationship between ethanol and grain in the first six months and better income for Lantmännen Agroenergi. The ethanol business is still running at a loss and the market continues to be very volatile: 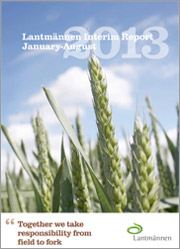 “One major cause of uncertainty in our ethanol business is the government’s proposal for control measures for biofuel in this autumn’s budget bill. This could lead to the conditions for Agroetanol becoming dramatically worse. In practice, it could have a negative impact on the environment due to higher imports of ethanol whose climate performance is much worse. A strategic review of our ethanol business will be carried out as a result of the government’s proposal,” says Per Olof Nyman.

The Food Sector’s profit for the first eight months of the year amounted to MSEK 212 (MSEK 168). All operations in the sector improved their profits in this third, contributing to the higher figure. Lantmännen Cerealia’s action programme was put in place to turn around the negative profit trend from last year and it has produced good results. Positive effects of Lantmännen Unibake’s new, more efficient organisation are now starting to be seen, and Unibake’s operations in the United Kingdom have improved considerably this year.

On 3 June Lantmännen and the UK investment company CapVest formed the new company Scandinavian Standard, which acquired the Kronfågel Group from Lantmännen, and the Norwegian company Cardinal Foods. More background information on this deal is available on Lantmännen’s website: CapVest and Lantmännen Partner to Create the Nordic’s Premier Poultry Producer.

Lantmännen Real Estate’s profit is so far at the same level as last year: MSEK 112 (MSEK 128). This reduction was mostly due to higher capital gains from the sale of real estate in 2012.

“Lantmännen’s financial position has improved significantly, and net debt fell by approximately SEK 2.3 billion compared with the same period last year – including more than SEK 1 billion in the net effect of the Kronfågel deal. Combined with the better profits in our operations, this provides us with a stable financial foundation, making us well-equipped for the future,” concludes Per Olof Nyman.

The full interim report is available digitally at www.lantmannen.se/delarsrapport.