2022-07-13: This year’s grain harvest is expected to be of normal size, which in an uncertain world is of particular importance for Swedish farmers and the national food supply. Summarized across the country, the crops are estimated to produce a good yield, while the lack of precipitation in the eastern parts of the country and a harsh early spring in the Mälaren region limit the harvest potential.

Lantmännen believes in a normal-sized harvest this year

Lantmännen’s forecast for the Swedish harvest amounts to 5.3 million ton of grain, which means that we e​xpect this year’s grain harvest to be slightly larger than the previous year (4.9 million ton), and in line with the 5-year average.

It looks like we are moving towards a medium-sized grain harvest in Sweden this year. The harvest potential looks promising in the south and west of Sweden, but the east of Sweden and the Mälaren region have been affected by both wintering and drought

The harvest lays the foundation for the Swedish food supply

The war in Ukraine – which is having a big impact on the world’s and Sweden’s food supply systems – highlights the importance of a stable food supply. The harvest is the foundation for Sweden’s food supply and it is of great importance that Swedish farmers can salvage a harvest of good quality. Even before the Russian invasion of Ukraine, prices of agricultural inputs were increasing, and prices have doubled since last year. In the uncertain world we now operate in, sustainable and long-term profitable production of Swedish grain and Swedish food is more important than ever. 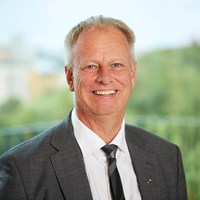 It is more important than ever to secure a thriving Swedish farming that contributes to a stable food supply. There is a big uncertainty right now, and the supply of food must be secured. With the harvest as our starting point, we at Lantmännen, together with our members, Swedish farmers, take responsibility from field to fork, and deliver sustainable world-class food.

Swedish farmers spend the whole year evaluating what efforts that need to be made in their fields and at wh​at time. It is therefore of particular importance that the infrastructure and logistics around the harvest are planned to meet the needs and manage the volumes in the best possible way.

In recent years, the pressure on Lantmännen’s reception sites has been high during the harvest and we have a large capacity for receiving, drying and storing grain and other crops, which ensures a safe reception of the harvest from Swedish farmers

The journey towards harvest:

During autumn 2021, a large autumn sowing was established, something that generally leads to a big harvest, given favorable weather conditions, since autumn sown crops are more robust and often more high-yielding that spring sown crops. This year’s autumn crops were faced with several challenges in different parts of the country; from crops occasionally being under water after persistent rainy weather to game damage by elk, deer and wild boar. In the east and central parts of Sweden, it was occasionally very cold with water on the fields, which resulted in the crop being frozen.

Spring sowing started slightly later than usual this year due to the late spring in large parts of the country. At the beginning of spring it looked dry but by the end of the season there was plenty of rain, which resulted in good growth. The continued chilly and wet weather in May favored spring sown crops which developed slowly but well in large parts of the country. In June, temperatures rose slightly, which was positive for most crops at this stage.

Summarized across the whole country, both autumn crops and spring sown crops seem to have the potential to provide a good yield, while the lack of precipitation in the eastern parts of the country during the spring and early summer and a harsh spring winter in the Mälaren region limits the harvest potential. Large parts of the country could currently benefit from more rain and sun, and moderate summer temperatures that provide the crops with an opportunity to mature at a normal rate; the final month before harvest is crucial.

Farmers all over the country are now focused on a period of intense work with this year’s important harvest – and in the southern parts of Sweden, the harvesting is already under way. The harvest takes place between July and October, after which the harvest results are compiled.

Images are available at https://www.lantmannen.com/newsroom/press-images.

In July, Lantmännen publishes its harvest forecast that estimates how big the harvest for the year will be. The forecast aims to give Lantmännen data on how much grain that will be delivered by Swedish farmers during the year.

Summarized across Sweden, autumn crops (autumn wheat, autumn rapeseed and rye) seem to have the potential to provide a normal yield and the spring sown crops (oats, spring barley, spring wheat, spring rapeseed and peas) contribute to a slightly higher total harvest. Even if the conditions look favourable now, the final month before harvest is crucial. Large parts of the country could currently benefit from more rain and sun, and moderate summer temperatures that provide the crops with an opportunity to mature at a normal rate.

How Lantmännen calculates its harvest forecast

Lantmännen publishes its harvest forecast - an estimation of this year's harvest - in July. The forecast aims to give Lantmännen data on how much grain that will be delivered by Swedish farmers during the year. The forecast also gives the general public information about the coming harvest.

The harvest forecast is based on a yield assessment that is based on weather data, precipitation, temperatures and areas sown for each county, that farmers in Sweden submit to the Swedish Board of Agriculture.

Historic data, such as yields for similar years, are also factored in. The forecast is then reconciled by Lantmännen sales personnel in each respective county and updated with any new facts before publication.

Making an assessment of the harvest in advance is difficult, which is why it is important to remember that the harvest forecast is just that, a forecast. We will only know for sure what this year’s harvest will look like once the farmers have brought in their crops and the results have been compiled.